This page tries to give some background information on how PlasmaMR decomposes a job into tasks, and which task types are used. In this respect PlasmaMR is very different from other map/reduce implementations, as it employs fine-grained job decomposition. This means that all processing steps reading or writing files are considered as a task, and not only those steps that drive the user-specified map and reduce functions. This approach raises interesting questions about what the best decomposition is, as we'll see.

As all data files reside in PlasmaFS (and there are no files in the local filesystem), every task can be principially run on every node. If the PlasmaFS files accessed by the task are stored on the same node, the accesses are very fast (even shared memory is used to speed this data path up). If the files are stored on a different node, PlasmaFS is responsible for making the files available via network. On the one hand this raises the transport costs, but on the other hand more CPU cores can be used (or more flexibly used) to execute the tasks. Of course, there are lots of ways of assigning tasks to nodes, and some are better than others. We discuss this in more detail below.

Before the job is decomposed, the input data is analyzed. The input data can be given as one or several PlasmaFS files, with or without block replication. The data is now cut into pieces, so that

This picture show a file with a replication factor of two, i.e. each data block is stored on two nodes. The system splits the file up into five pieces (red, blue and green block ranges). Because each block is available on two nodes, it is possible to select each block from two nodes. It is now tried to make the block ranges as large as possible while creating enough pieces in total.

Formally, each piece is described as a list of block ranges coming from input files (see types Mapred_tasks.file and Mapred_tasks.file_fragment). In the following, we refer to this input as "pieces of input data", and D be the number of pieces.

This example illustrates these two types: 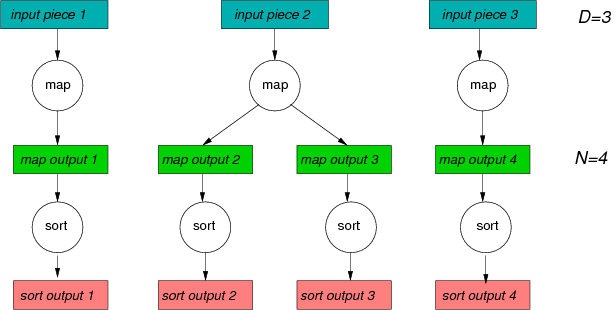 Here, we found three input pieces, and each piece is mapped to a map output. For the second map operation we got more output than sort_limit allows, and hence two map output files are created. So the Map round of tasks created four output files in total, and each of these files is sorted.

After sorting, the data is available in this form: There are N sorted files where each file stems from one input piece. There can be more sorted files than input pieces, i.e. N can be larger than D. The remaining algorithm needs now to merge all these sorted files, and it has to split the data into P partitions at the same time (remember that the keys of the records are partitioned into P sets). We call these sets "partition 0", ..., "partition P-1".

Merging and partitioning is done by applying the following type of task several times:

This picture merges the inputs and splits them into s output files:

For the inputs we already know that the keys of the inputs fall into a range of r partitions. The outputs are now further split in a way so that each of the s files contains the records from partition ranges that are s times smaller.

This task type allows a lot of constructions. For example, one could first merge all the N sort output files to a single file, and then split this file into P partitions, i.e. we first run Shuffle tasks where only merging happens, and then Shuffle tasks with only splitting. Another construction would do the converse: First split the N sort outputs further up into N*P smaller files, and then merge these files into P partitions. However, what PlasmaMR really does is a mixture of both approaches: In several rounds of data processing, Shuffle tasks are run that both merge and split to some extent. This is seen as best method because it allows a lot of parallel processing while not creating too many intermediate files. It is explained in more detail below.

There is also now a fifth type of task: enhanced map tasks, or Emap tasks (since Plasma 0.4): This diagram shows how Emap tasks could be composed of existing Map, Sort, and Shuffle tasks. Note that the current implementation is different in so far first the data is split into partitions, and then the pre-partitioned data is sorted. 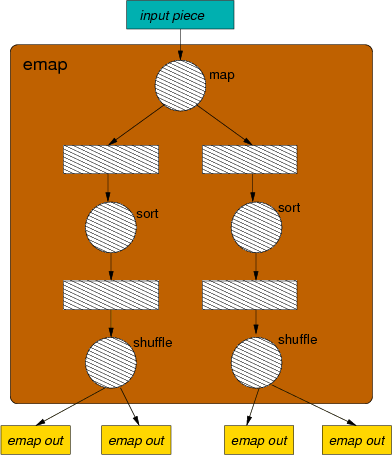 The scheduler only creates Emap tasks when it is configured to do so. The number of output sets is a parameter (Mapred_def.mapred_job_config.enhanced_mapping). Experimentation showed so far that Emap is not always an improvement, in particular because a higher number of intermediate files are created, resulting in higher data fragmentation, and more work for merging data.

PlasmaMR represents execution graphs explicitly (in Mapred_sched): The execution order of the tasks is not hard-coded in a fixed algorithm, but the order of steps is expressed as a graph where vertexes represent either data or tasks, and the edges represent the data flow (and implicitly the execution order). This has a number of advantages:

The construction algorithm is generally an iterative process that progresses while the already constructed part of the graph is being executed. It is not possible to create the graph in one go because there are some aspects that depend on the outcome of already executed tasks. In particular, the Map (or Emap) tasks can emit a variable number of output files, and the number influences the layout of the graph. We could now wait until the execution has reached the point so that the number of all these files is known, and first continue the graph construction at this point. However, this would mean that the parallelism of execution was greatly reduced because the number of executable tasks decreases to 1 while approaching this point in the construction process.

As a better alternative, the graph is extended so far possible whenever an executed Map or Emap task has produced outputs. This means that dependent tasks are added as soon as possible, and generally more tasks are considered as executable in the construction/execution process.

Another advantage of the iterative construction is that even the locality of files (i.e. on which nodes files are really stored) can sometimes be used to optimize the graph.

The following diagam shows an execution graph for D=N=3 and for P=4 partitions:

The graph can be analyzed in the following ways:

Note that the above diagram has been produced with the -dump-svg switch of exec_job. When generating diagrams for larger jobs, the following observations are easier to make.

Roughly, the graph is executed top to bottom. The possible parallelism is limited by the number of tasks in the same row. For instance, this diagram has a row with only SH #6 and SH #7, so at this point of execution only these two tasks can run at the same time.

Another observation is that the locality of the data increases from top to bottom. For example, once SH #6 and SH #7 are done, the whole data set is split into two independent halves. If each half was executed on its own machine, there was no need for a task on one machine to get the output of a task that ran on the other machine. Generally, once the number of partitions exceeds the number of nodes, there is no need anymore to access data over the network.

In each round of data processing (as indicated by the "rows" of the diagram) a certain number of files is merged, and the data is again split into a certain number of files. If now D and P are roughly in the same order of magnitude, the sizes of the files will not dramatically change from round to round. Especially, very small files are avoided, and random disk seeks are never required to gather up small fragments from the disk.

Execution graphs with Emap and Shuffle

There are many ways to execute a graph. The question is which criterions are important to get an idea how to do the execution in an optimal way:

It turns out that maximizing CPU utilization is the by far most important optimization goal. Plasma employs two strategies for this, one that has long-term effects in mind, and one that optimizes the short term utilization. As of Plasma-0.6, both strategies are used together (one half of the tasks is assigned by the long-term, and the other half by following the short-term strategy). Terminology: If the execution of a task allows it to run another task because all dependencies are fulfilled, we say that the task enables the other task. The strategies are successful when the number of runnable tasks is maximized.

After selecting tasks via these strategies, there are often tasks with the same eligibility. The question is which to prefer. Now it is checked what types the tasks have, and how well they can be combined with the already running tasks in terms of a best combination of CPU- and I/O-bound tasks.

PlasmaFS allows it to control on which nodes files are stored. Effectively, this means that we control when the data travel over the network, and when the data are stored on the same node where they are produced.

Generally, Plasma writes new data to the local node. There is an important exception, though. For Emap tasks, the output is written to the node that will run the following tasks processing the data. The advantage is that the network is more utilized at a time where the overall network utilization is low.